Why learning happiness matters now more than ever

From CEOs to Learning and Development Managers to home workers, we have all gone through significant change in how we work, learn, and feel about that over the past year.

The benefits of happiness as a state are well documented – enhancing motivation and achievement. But what if you apply the concept of happiness to learning?

With the surge in digital adoption, one question to ask is: Are you taking a regular temperature check of how happy your organisation is with the move to online learning and remote training delivery?

In this article, Client Services Director, Gavin Woods, draws on his recent conversations with learning leaders and provides his take on the ups and downs of learner happiness over the past year.

He also looks ahead at how and why the happiness of everyone involved is likely to change further and how organisations can take steps now to thrive rather than merely survive in the new digital learning world.

Before embarking on a career centred on learning technologies, my studies focused on Economics where the concept and analysis of happiness/satisfaction (called Utility) plays an important role in understanding situations and influencing decisions.

This economic view of happiness focuses on “the incremental satisfaction received from consuming a good or service”. As humans, we are inherently driven to maximise our happiness at any given point in time. This matters for organisations because how we feel about things at any one point in time influences how we act, how we work and how we learn.

Understanding the happiness journey that our organisation has gone through with online learning and where that happiness is at now, equips us to react, adapt and plan effectively for the future of learning and increase our chances of having satisfied learners. Add the secret ingredient of making the learning effective as well as enjoyable and we are really off to the races!

So, how happy is your organisation with online learning?

If we plotted the happiness of your organisation with your L&D offering what would it look like?

How would it differ from your senior leaders to your core learning and development team to the learners themselves?

In the graph below, I’ve plotted what we have been seeing in terms of how organisations were reacting to global events and how they were feeling about it along the way.

It’s been informed by the conversations that I and the Aurion Learning team have had with learning leaders over the past year on the projects we have worked on as well as the feedback from over 1,500 L&D professionals who attended our webinars.

So, what does the utility/happiness graph show? What were we seeing and hearing in 2020?

L&D / Training Managers: Alongside Project Leaders, this is one of the groups that we spend most time engaging with and listening to. L&D teams started 2020 in a buoyant mood, the new year always brings lots of planning, time for new ideas for the learning offering and hopefully new training budgets.

The COVID-19 crisis changed all that and quickly and it took its toll on happiness, not just because this group entered crisis mode but how COVID-19 highlighted digital delivery deficiencies for many organisations who had been considering but not necessarily implementing their digital learning strategy as part of their wider offering.

The graph reflects how this group rallied commendably in the real world and were able to put immediate plans in place to rapidly respond to remote learning challenges through offerings like webinars, eLearning courses, and resource packs.

Happiness rallied too as plans seemed to be working and it has been a broadly upward trend since with a few understandable hiccups along the way and plateaus associated with further lockdown challenges and the emergence of niche challenges. While digital learning is here to stay for this group, there are elements of the previous offering that will still make a return when circumstances allow so happiness hasn’t fully recovered to that pre-2020 high.

One important note, however, is that while healthy, we have seen a decline in the latter stages of the year which we will touch on in our next section.

Senior Leaders / C Suite: While this group were not unhappy with the learning offering of the organisation at the start of 2020, it was perhaps by exception that they focused significantly on it, so our graph shows a level of happiness initially that reflects that.

Senior Leaders experienced the same crisis as everyone else and in many cases had more pressing business continuity issues outside of the L&D offering to deal with, so our graph shows happiness dropping but indicates a focus elsewhere.

In fact, happiness with the learning offering has continued to spike and has settled at a higher level than it began in 2020. In many of the conversations we have been having, it is a source of pride for the organisation’s leaders how their learning teams have worked so hard to introduce new offerings, new tools, and new ways of working that have clearly been well received to date.

Learners: Learners in many organisations, particularly those with well established L&D functions started the year pretty happy overall with the learning offering. They went through the inevitable drop when COVID-19 took elements of that offering away but their happiness rallied earlier and more quickly than our other groups.

Our graph shows this quick turnaround which reflects the flexibility now afforded to many home workers as well as some degree of novelty of using webinar and online meeting tools in earnest for the first time in some organisations.

We saw in lots of organisations that the completion of training using online platforms, e-learning and other online tools actually went through the roof. In some cases, this was because learning was seen as a worthwhile way to tread water, the idea being that if learners couldn’t safely do all aspects of their current roles now, they could at least be investing and preparing to do them better when they returned in a few weeks’ time.

In fact, as L&D responded with new online offerings, we heard how learners were embracing these. The courses that previously took them out of the office for 2-3 days in a row could be spread over existing work and social commitments over a longer period, the study could be self-owned and self-directed and online meetings used to reflect and review progress and foster discussion with somewhat easier logistics involved.

All was going well; things would be back to normal soon and some new digital habits were here to stay! Happiness with the L&D offering responded accordingly back to pre-crisis levels.  All good.

Except, we know the story didn’t end there, unfortunately. As the pandemic has persisted, the novel L&D offering for many has lost its lustre, mental health and wellbeing of staff has been impacted too and we have seen learners longing for interaction with others, becoming tired of single format digital offerings and their happiness has dropped accordingly and is seen on a worrying downward trajectory in the closing months of 2020. 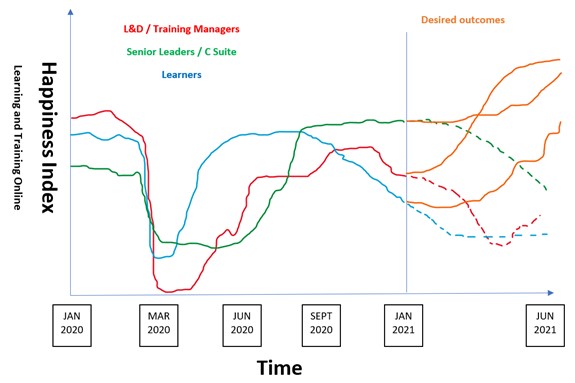 So, where are we heading?

As we rounded out 2020, we saw a mixed bag of happiness with the L&D offering.

Senior Leaders were happy. Learners were becoming less happy quite quickly and the L&D teams while still content with their work overall were starting to sense the future disquiet and reflecting on their plans.

So where are we heading in terms of happiness with the L&D offering in 2021, noting that this is only an informed projection? How does the future happiness of one group affect the others? What should you do if you find yourself in one of these groups to maximise your satisfaction with 2021?

The graph above shows my projection of how the happiness curve might play out if all things remain equal. (As an aside Pareto optimality – another useful term from an economics degree where one group can’t be made better off without making another group worse off).

Senior Leaders/ C-Suite: This group finished the year happy but it won’t be long before the gloss of the lockdown achievements of the L&D team wears off, new challenges emerge and new contributions are sought from key business units.

L&D / Training Managers: 2020’s plans are in the past. Standing still means going risking going stale or worse, going backwards. Embracing the status quo means ignoring falling learner satisfaction and coming under pressure from senior leaders and having to rally again sooner than you think.

Learners: With a stagnant offering, learner happiness looks set to fall further before bottoming out. I don’t anticipate it falling into the loath category but more likely to reflect apathy levels with poor perception of the L&D offering. 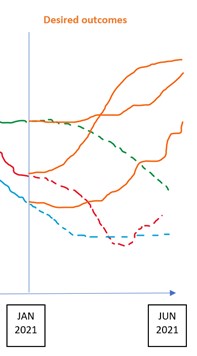 So what should you do?

This is not a message of gloom, no one needs that coming out of 2020. This is a message of hope and opportunity. We want everyone to be as happy as they can be (maximise utility for a given economic budget) For that we have outlined some steps below that you can take if you are in one of these stakeholder groups to achieve the desired outcomes shown in orange in our graph.

If you are a Senior Leader/ C-Suite: Your organisation has survived now you want it to thrive. To do this you can:

If you are an L&D / Training Manager: You have joined the rest, now you want to be the best. To do this you can:

If you are a Learner: You’ve developed new ways to learn, now you want to learn new ways so you can develop. To do this you can:

Happiness is just one of the factors to consider in your L&D strategy.

The Aurion Learning team spend our time listening and then trying to maximise the happiness of our clients, their organisations and their learners through scoping and delivering learning that works.

If you want to start a conversation and chat through your L&D plans, get in touch.

Adult versus child learning. Are we just a child at heart?

It all starts with hello

Contact us to discuss your learning challenges and see how we can solve them.